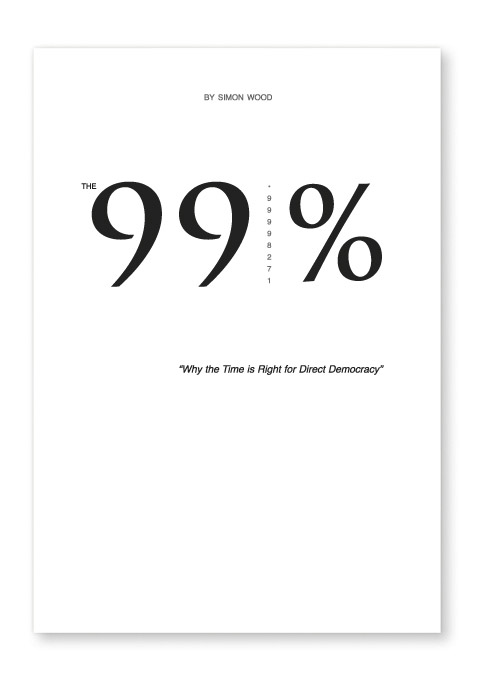 Instead of providing a list of contents, I will briefly outline the structure of the book. I begin with a broad summary of some of the issues facing the world as a whole and then talk about the nature and history of democracy and its implications. Recent advances in citizen collaboration on the internet are then discussed. This is followed by a case study of how a democracy can be corrupted, using the United States as a subject. The book then goes on to explain the system of direct democracy and also its drawbacks, along with suggestions of solutions to those drawbacks. A simple method of implementing direct democracy is also put forth. There is then an appendix containing the original text of the Universal Declaration of Human Rights (which I suggest be read in its entirety). In keeping with the spirit of direct democracy, I have decided initially to publish the book online and publicize it directly by myself in order to bypass publishing companies and establishment media. In the same vein, I have further elected to leave the choice of payment (including no payment) for the book completely up to the reader.

The title refers to the percentage (to eight decimal places) of the world's population who were not billionaires (as listed in the 2011 Forbes list of billionaires) when it passed the 7-billion threshold, a logical extension of the now-famous 99% slogan used by the OWS movement. I want to make it clear that this is not an attempt to capitalize on the slogan (the book is free), but simply to attract more attention to what I believe could be a viable solution to the many crises societies face.

I wrote this book to 'do my bit' in solidarity with all those working toward true democracy and justice. I support no political party and have no ideological axe to grind as I believe that each society should choose its own way of operating via consensus, and also that there is not necessarily only one 'right' way to do things. I further believe the loaded terms right, left, liberal, conservative and so on do not realistically represent the views of the majority of people, who likely hold a mixture of different opinions and cannot be compartmentalized – and that these terms have been co-opted by establishment media outlets and other parties in order to provide a dumbed-down 'us versus them' narrative. I also have no interest in publicity or profit for myself. In order to make possible the direct democracy system suggested in this book - which would require a large website/forum and high-level programming skills - levels of technical expertise and resources far beyond my own will be necessary. I therefore call upon anyone with the necessary skills and motivation for bringing this plan to life to contact me directly. I also call on people with significant resources who are sympathetic to this cause to aid in any way they can.

Update: Your Democracy Needs YOU!

This book is currently being translated into French and Japanese. I am looking for volunteers who can translate the book into their native language. Please have some translation and writing skills, but you don't need to be a professional writer/translator. The most important thing is integrity, honesty and a passion for human rights and direct democracy. Although the book is free, I have nonetheless received many voluntary donations (for which I am very grateful) so translators will receive half of all donations for their work. I am especially looking for Spanish, Greek and Italian translators, as those are the countries which are currently in most desperate need of a grassroots movement toward direct democracy.

I am also in desperate need of people with high-level programming skills and/or people with significant resources who would like to be an integral part of creating this online grassroots movement. Please contact me directly via any of the various media linked to at the bottom of this page.